5 End-Of-Life Traditions From Around the World

While death is one of the most common denominators of the human race, every culture deals with it differently.

For instance, some cultures believe that death is more of a gradual journey than a sudden process. Surviving family members and friends may take weeks or even months to say their final goodbyes. This differs greatly from the end-of-life traditions many of us are accustomed to in the U.S., which take place no more than a few days after a person passes.

End-of-life rituals often reflect a core set of beliefs and values, which is why they’re celebrated differently among certain groups of people. Here’s a look at some traditions from around the world.

In Tana Toraja of Eastern Indonesia, funerals are considered the most important social moment in a person’s life. Lasting anywhere from a few days to a few weeks, funerals are seen as a publicly shared transition where the whole community participates.

Families save up for long periods of time to raise the resources for a lavish funeral, where animals are sacrificed and distributed in the name of the deceased.

Until that moment, which can take years after the physical death, the deceased is referred to simply as a person who is asleep. They’re laid to rest in special rooms in the house where they’re symbolically cared for by surviving family members.

In many countries, typical funeral traditions have stood the test of time, but that is not the case for South Korea. Traditionally, families kept their loved one’s body at home for three to seven days to prepare it for the funeral. It was believed that the house doorway was the dividing line between the dead and alive.

In modern-day South Korea, however, funeral homes take care of the preparation of the body. The funeral typically takes place on the third day following a death with a visitation to follow. For families who choose burial, pallbearers lower the casket and bow three times in front of the gate at a cemetery. Then, they perform a burial ritual to get rid of evil spirits.

While burial was the most common funeral arrangement in South Korea for several years, cremation has since taken its place. In the 1990s, the government changed burial rules because cemeteries ran out of space. Many families now turn their loved one’s remains into beads, which are then put on display.

In the Philippines, death is considered one of the most important occasions in a family’s life. The funeral represents an opportunity to strengthen ties by bringing people together.

Typically after a death, a nine-day period of prayers and masses are offered up to the deceased. Then, a 40-day mourning period begins where family members indicate their state of bereavement by wearing a black pin on their shirt in public. A ceremonial mass follows the end of the 40-day period.

This ritual is not the same for every group, however. For example, it’s tradition for the Benguet to blindfold the deceased and place the body next to the main entrance of their house for family members and friends to visit.

The Tinguian dress the deceased and set them in a seated position on a chair, where they place a cigarette between their lips. The Cavite, on the other hand, are known to bury the dead in hollowed out tree trunks. When a death is near, the person is encouraged to select a tree they wish to be entombed in.

A funeral in Ghana can last up to seven days, drawing in thousands of people adorned in black robes and gold jewelry. They typically start on a Saturday, with many villages holding more than one funeral in a day.

Mourners give offerings to the spirits of the ancestors, and loud traditional dancing and drumming accompany the dead on their journey.

Fantasy coffins are constructed, detailed and painted to bury the deceased. The coffins are designed to reflect the deceased’s personality or passion, as well as their accomplishments and dreams.

In the U.S., planning an end-of-life celebration generally takes less than a week. If no arrangements were preplanned in advance, the family will designate their choice for burial or cremation. They’ll also decide the type of service (ex: funeral, gathering, memorial service and/or visitation), as well as their preferences for personalization (ex: flower arrangements, memorial folders, video tributes and more).

In recent years, green burial has grown in popularity, as more people understand the environmental and societal benefits of natural decomposition. Another end-of-life option growing in interest among families is simple cremation, a disposition method in which a body is cremated without a formal service conducted before or after the process.

Some individuals even choose to participate in the planning of their funeral by making arrangements before a death occurs. This allows them to document their final wishes in writing for surviving family members to carry out.

Preplan To Save You and Your Family Time, Money and Worry

Interested in learning more about the emotional and financial benefits of preplanning? Download the Seniors’ Guide to Funeral Arrangements for more information on how preplanning can save you and your family time, money and worry. 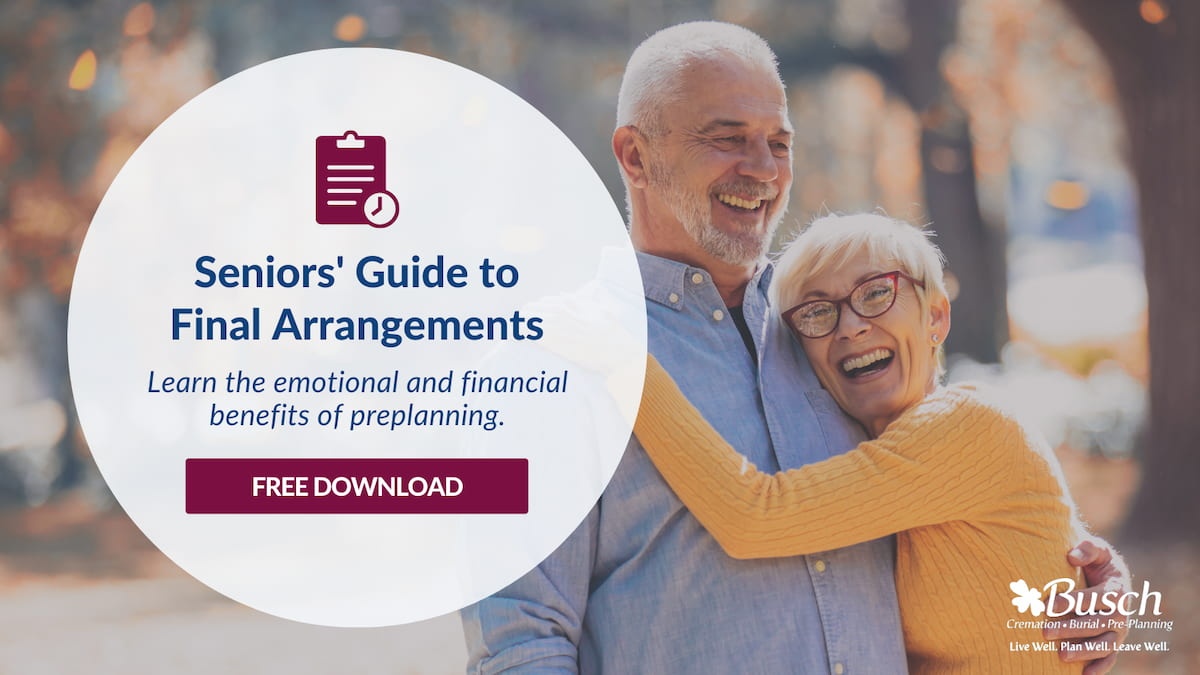 Considers it an honor as a Certified Celebrant to listen to life stories, and then design and conduct meaningful tributes. Cathy also trains celebrants nationally, equipping them to share those legacies in ways that comfort and enlighten. Honorably serving Busch families since 2004.